Should Scotland go and **** itself? 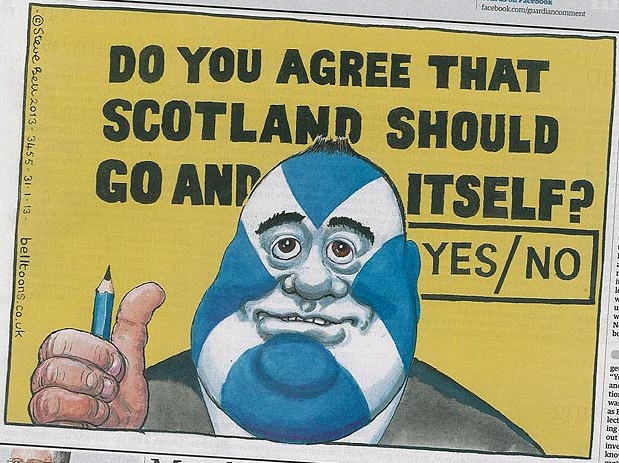 The cartoon by the English political cartoonist Steve Bell poses the question:

Do you agree that Scotland should go and **** itself? Yes/No

The reader is left to conclude that the missing word, obscured by Alex Salmond's head, is an expletive as is often used in this common turn of phrase.

The cartoon was styled in the manner of the question proposed by the Scottish Government for the independence referendum in  2014: "Do you agree that Scotland should be an independent country? Yes/No"

The cartoon was published the day after the Electoral Commission made their recommendations on the fairness of the referendum question and process.

The Guardian spokesperson tried to justify this slur on Scotland and the independence referendum by stating the cartoon  "is a commentary on Alex Salmond’s vision of an independent Scotland and reflects Bell’s view it would be against Scotland’s interests."

This cartoon appeared in The Guardian newspaper on 31st January 2013.