A super turn-out at the local area meeting got the Highland campaign off to a flying start. 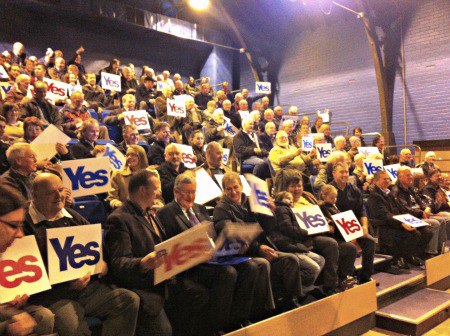 The Highland Inaugural Meeting had a bumper attendance with about 165 participants filling The Spectrum Centre in Inverness to the last seat. In fact, this was one of the biggest local area meetings so far with various well-known figures in attendance: MSPs Fergus Ewing, Rob Gibson, John Finnie, Jean Urquhart, and Dave Thompson. I also recognized various faces from the September March and Rally, most notably Jist dae it, one of the most photographed marchers.

The question and answer session following the presentation revealed Highland community campaigners from a wide variety of backgrounds: Scots and New Scots, cross-party and non-party political. While SNP and Green party members were to be expected, a LibDem member came as a surprise and was greeted with applause. Interestingly, Gerry McGregor was one of the notorious six[1] who protested against Yes Scotland being refused to set up a stall at their party conference.

Questions from the audience centered around how to respond to the public who want to know exactly what Scotland will look like after independence. While each campaigner may have different aspirations for a future Scotland, the answer, of course, is that this will be for the people of Scotland to decide in the first independent Scottish election in 2016.

Fergus Ewing praised the professionalism of the Yes Scotland advisors Ian Dommett and Jennifer Dempsie and sent Winnie Ewing's regards. And to dispel the myth that we campaigners have to bust - that independence equals SNP - he made clear that "Most of us joined the SNP to deliver independence, not  in order to govern an independent Scotland".

The most poignant contribution came from a former counciller for Perth & Kinross who had joined the SNP many decades ago, many of his party friends having passed away since and so he appealed to us fellow campaigners to give this campaign our best shot so he may live to see Scotland independent. The Highland area, being the most geographically dispersed, has its challenges if we want to take Yes Scotland forward and into every village but the atmosphere at the meeting was upbeat and confident, not least boosted by the passion and number of attendees. So, yes, we won't let Scotland down nor those that have paved the way before us.

For further news on the Yes Highland campaign visit YesHighland.net.